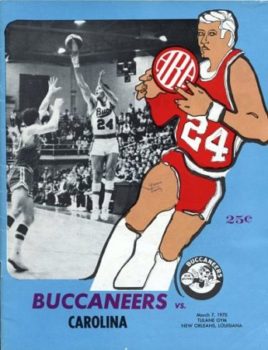 The team picked up Wendell Ladner in the draft and rechristened itself the Louisiana Buccaneers, planning to play its home games throughout the state during the 1970 – 1971 season including in New Orleans, Shreveport, Lafayette, Monroe, and Baton Rouge. Like most ABA teams, the Bucs were never on the strong financial ground, and then move to the smaller Tulane Gym combined with the marked drop off in their play caused revenue to dry up. It was hoped that becoming a “regional” franchise would provide more capital.

However, on August 21, 1970, the franchise was purchased by a new owner, and ten days later it was moved to Memphis, Tennessee, and renamed the Memphis Pros.