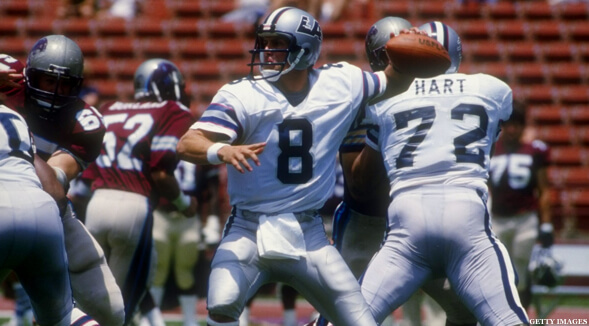 Then, just as quickly as the Express rose, they fell. Midway through the season, the FBI began investigating Oldenburg’s financial dealings. Multiple exposés by The Wall Street Journal and The New York Times revealed Oldenburg not only had a habit of luring savings and loans into questionable deals but was also nowhere near as well off as he had long claimed.

It turned out that the USFL was so determined to get a solid owner in Los Angeles that it didn’t conduct any meaningful due diligence on Oldenburg’s application. While Oldenburg had gained a reputation as the enfant terrible of the league, no one even suspected that he was a fraud until the investigation revealed that he had virtually no money. It appeared that he was only able to appear to have enough net worth to buy the team by buying a piece of property for a discount, then selling it to a small bank that he owned for ten times its actual worth.

As bad as the situation with the Blitz had been for the league in 1984, the Express was even worse in 1985. Not only did the Express roster costs dwarf Chicago’s due to the large contracts, but the league had contracted in the off-season and there were only 13 other teams to contribute to supporting the Express.

In what proved to be a harbinger of things to come, the team was evicted from its hotel during training camp after the bill went unpaid. The players were forced to room with each other for the remainder of camp. They also went without water for much of the camp after a $136 bill went unpaid. A bank won an attachment on the franchise as part of a lawsuit against Oldenburg after he defaulted on a loan. However, the attachment was withdrawn when bank officials learned they would be responsible for $1.3 million in player salaries that week.

Unable to find a new owner for the Express, the league announced the team would suspend operations for the 1986 season. However, many of the very issues that plagued the Express in 1985 made it very likely the team would not have returned even if the league had succeeded in winning a large payoff from the NFL to finance a move to the fall. Additionally, the Express would have had to compete against two NFL teams and, if they had returned to the Coliseum, would have had to share their home with one of them (the Raiders) and the University of Southern California’s team.