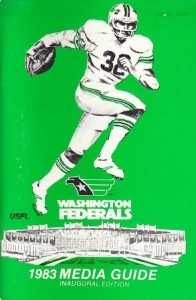 The United States Football League founder Donald Dixon was a strong proponent of a USFL franchise in Washington, D.C., and insisted on one despite the dominance of the National Football League′s Washington Redskins in the Washington market. Real estate magnate Marvin Warner originally was slated to own the Federals, but when the USFL announced it was fielding a team in his hometown of Birmingham, Alabama – the team which became the Birmingham Stallions – Warner opted to take that franchise instead. The USFL then turned to prominent Washington attorney Berl Bernhard. He stood atop a murky ownership structure, serving as majority owner of a limited partnership owned by a limited partnership that was itself operated by three corporations. As part of this arrangement, Washington Football Partners, a limited partnership, was organized on August 20, 1982, in the District of Columbia to hold the franchise, with Bernhard’s Capital City Sports Management as the general partner. The Federals played in Robert F. Kennedy Memorial Stadium in Washington, D.C.

Financial projections submitted to potential investors in Washington Football Partners, Ltd., foresaw the Federals losing $1.12 million during the 1983 season, with anticipated revenues of $4.13 million – including $2.6 million in ticket sales – and expenses of just over $5.25 million. Federals ticket sales before the USFL′s first season were disappointing, and after the Redskins won Super Bowl XVII on January 30, 1983 – their first NFL championship since 1942 – only 36 days before the Federals′ first game, Federals tickets sales dried up almost completely.