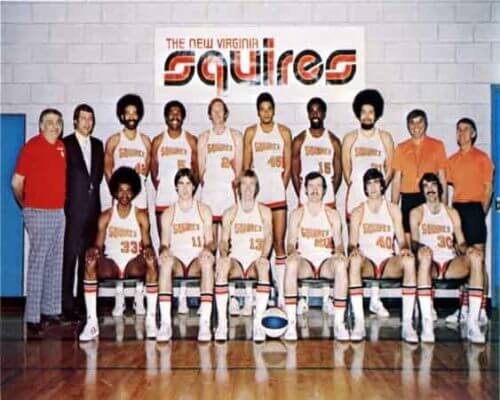 While the trades may have provided enough short-term financing to keep the Squires in business, the loss of so much talent angered the fans. The Squires’ attendance fell through the floor and never recovered. The Squires’ final two seasons in the ABA were forgettable as losses mounted and popular coach Al Bianchi was fired. The 1974 – 1975 and 1975 – 1976 teams went 15-69 (17.8%), the worst winning percentages in ABA history. The team was coming unraveled off the court as well. In 1974, Barry Parkhill sued the team after his paychecks bounced. The Squires nearly shut down for good in February 1976, but only managed to stay afloat by a sale of advertising banners and a $250,000 loan from a local bank.

As it turned out, this only bought the franchise three more months of life. On May 11, 1976—only a month after the end of the season—the ABA canceled the franchise after it missed a $75,000 assessment. This cost the Squires a chance to be compensated as part of the merger, which closed only a month later.

However, even if the Squires had been on the stronger financial ground, they stood no chance of being included in any ABA-NBA merger in any event. “Regional” franchises were not considered viable, and none of the Squires’ home cities were nearly large enough at the time to support an NBA team. In contrast, the largest television market in the Squires’ home territory, Hampton Roads–including the cities of Norfolk, Virginia Beach, Newport News, Hampton, Portsmouth, Chesapeake, and York County–had a combined population of 972,759 in the 1970 census. A professional basketball team serving the Hampton Roads market area would have competed with other NBA markets of similar size at the time, such as Phoenix (967,522) and San Antonio (864,014).