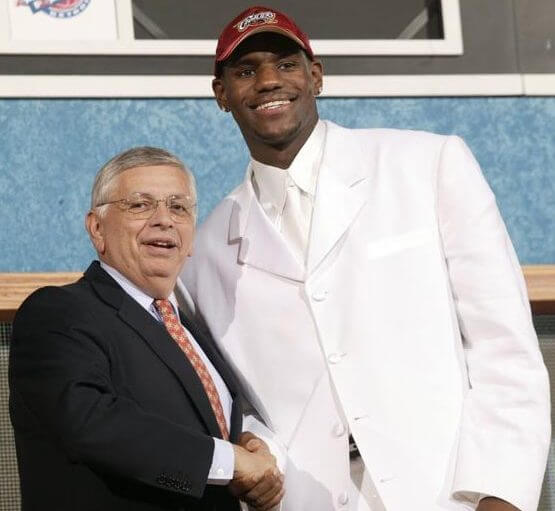 Several losing seasons followed which saw the Cavaliers drop to the bottom of the league and become a perennial lottery draft team. After another disappointing season in 2002–03, the Cavaliers landed the number one draft pick in the NBA Lottery. With it, the team selected local high school phenomenon and future NBA MVP LeBron James. As if celebrating a new era in Cleveland Cavaliers basketball, the team’s colors were changed from orange, black and blue back to wine and gold, with the addition of navy blue and a new primary logo. Dan Gilbert – who has owned the Cavaliers since 2005. Under Gilbert’s watch the team has won one NBA Championship. three Eastern Conference titles, and four Central Division titles.

James’ status as both an area star (having played his high school basketball at St. Vincent-St. Mary High School in nearby Akron) and as one of the most highly touted prospects in NBA history has led many to view his selection as a turning point in the franchise’s history. Embraced by Cleveland as “King James”, the 2003–04 season offered great hope for the future, as James rose to become a dominating player, winning the NBA Rookie of the Year Award. Hope was even greater for the 2004–05 season. James increased his production in terms of points, rebounds, and assists per game.