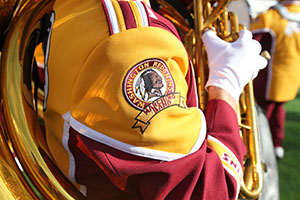 On August 9, 1937, the Redskins marching band was founded. The all-volunteer ensemble formed when Marshall brought the Redskins to Washington, with the goal of entertaining fans from the moment they walked into the stadium until the time they left it. The Redskins are now one of only two teams in the NFL with an official marching band. The other is the Baltimore Ravens.