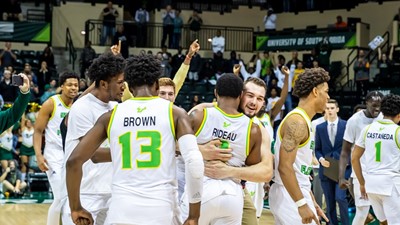 The University of South Florida’s basketball team first tipped off as the Golden Brahmans on December 1, 1971, with a 74-73 win at Stetson University. Their first home game was marked by a 98-77 loss to Florida at Curtis Hixon Hall in downtown Tampa, which would serve as USF’s primary arena of the seven courts the team would call home before the opening of the on-campus Sun Dome for the 1980-81 season, and was the only arena USF used every season through 1980. South Florida’s first home win would come on December 18 against Baldwin Wallace. The Brahmans topped 100 points for the first time in just their tenth game, beating Florida A&M 103-102. USF only played one game at their other home for the 1971-72 season, beating Missouri-St. Louis 85-82 at Fort Homer W. Hesterly Armory in West Tampa. The Golden Brahmans would finish their inaugural season with a record of 8-17 but recorded their first winning season the next year going 14-11.