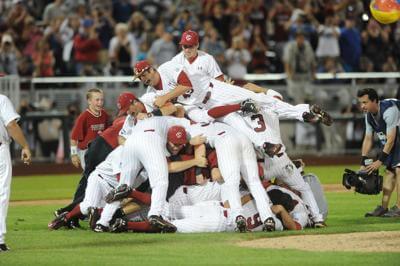 South Carolina finished the 2011 regular season 44–12 (22–8 SEC) and shared the SEC regular-season championship with divisional rivals Florida and Vanderbilt, but posted a 1–2 mark in the SEC Tournament in Hoover, Alabama despite their #1 overall seeding. Once the NCAA Tournament began, however, the Gamecocks rode strong pitching, clutch hitting, and incredible defense while cruising through their Regional and Super Regional, without a loss, on their way to a second consecutive berth in the College World Series. South Carolina proceeded to defeat Texas A&M 5–4 in their first game, then swept #1 national seed Virginia (7–1 and 3–2) in the next two, including a 13-inning win in the second matchup, to battle their way back to the CWS Championship Series versus SEC Eastern Division foe Florida. This marked the second time two teams from the SEC had participated in the Championship Series/Games. In-Game 1 of the Championship Series, South Carolina lived up to their mantra as they battled to win their second straight extra-inning game in the CWS, 2–1 over the Gators, in 11 innings. They had a much easier time with the favored Gators in Game 2, winning 5–2 to earn the 2011 CWS Championship and their second consecutive national title. The Gamecock defense turned an incredible nine double-plays in this CWS – no other participant turned more than three. South Carolina finished the season with a 55–14 overall record, setting a new NCAA record for consecutive postseason wins with 16, a new record for consecutive College World Series wins with 11 and became just the sixth program in history to win back-to-back NCAA Division I Baseball Championships. Carolina became the first team to win the College World Series in the new TD Ameritrade Park, and Gamecock second baseman Scott Wingo was named CWS Most Outstanding Player.