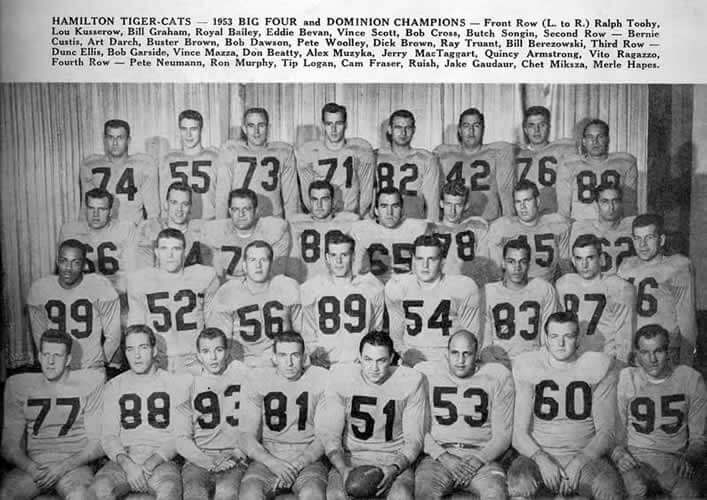 The 41st Grey Cup game was the Canadian Football Championship in 1953. Hamilton Tiger-Cats defeated Winnipeg Blue Bombers 12-6 at Toronto’s Varsity Stadium in a game which ended on a controversial pass incompletion.

The 45th Grey Cup was the Canadian Football Council’s (CFC) championship game of the 1957 season, which was played on November 30, 1957. The Hamilton Tiger-Cats defeated the Winnipeg Blue Bombers 32–7 at Varsity Stadium in Toronto.

This was the first Grey Cup game to be covered on coast-to-coast television.

The game is famous for a play in which Hamilton defensive back Ray Bawel intercepted a Winnipeg pass and raced unopposed for an apparent touchdown. As he passed the Winnipeg bench, however, Dave Humphrey, a Toronto fan who was standing in front of the Winnipeg bench, put his foot out and tripped Bawel. After the officials huddled together for a while to discuss the situation not covered by the rulebook, referee Paul Dojack assessed a penalty of half the distance to the goal line as a sort of compromise. As it turned out, the incident had little effect as Hamilton scored on the ensuing drive and the game ended in a 32–7 rout for Hamilton.