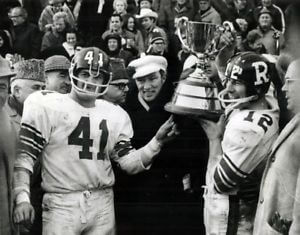 The Ottawa Rough Riders defeated the Edmonton Eskimos 16 to 6 at Vancouver’s Empire Stadium before a crowd of 38,102 fans.

56th Grey Cup was played November 30, 1968, and the Ottawa Rough Riders defeated the Calgary Stampeders 24 to 21 before 32,655 fans at Toronto’s Exhibition Stadium. Vic Washington’s 79-yard run is still a Grey Cup record, and he won the Grey Cup Most Valuable Player award. This was the final Grey Cup game to be played on a Saturday; beginning the next year and since then (except for 1970), all Grey Cup games have been played on a Sunday.

57th Grey Cup, the Canadian Football League’s championship game, was played November 30, 1969, and the Ottawa Rough Riders defeated the Saskatchewan Roughriders 29 to 11 before 33,172 fans at Montreal’s Autostade. It was the first time since 1931, a break of 38 years, that the CFL title match would be played in Montreal.

The game is the focus of the “Playing a Dangerous Game” episode in TSN’s 2012 documentary series Engraved on a Nation celebrating the 100th Grey Cup game. Concerns about ongoing FLQ separatist terrorist bombing activities in Quebec prompted the CFL and Montreal authorities to have police officers in full riot gear securing the stadium and Prime Minister Pierre Trudeau. However, no incidents occurred during the course of the weekend.