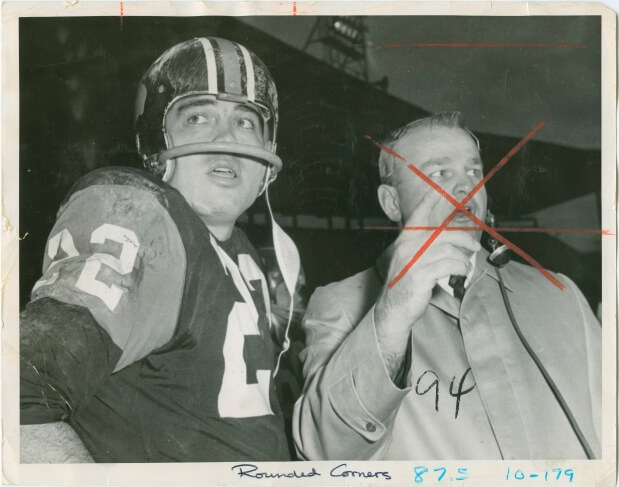 After achieving an 11–2–3 regular season record in 1964, and defeating the Calgary Stampeders in a three-game series in the Western Conference finals, the Lions advanced to meet the Hamilton Tiger-Cats in a Grey Cup rematch at Toronto’s Exhibition Stadium. In the rematch, BC got their revenge as Kapp, Fleming, and Bill Munsey, who gave a two-touchdown, two-way starring effort, helped the Lions to their first Grey Cup victory. With the addition of two field goals and an extra touchdown by the field goal unit, the Lions won the Grey Cup for the first time in franchise history with a 34–24 victory. The win ended 11 years of waiting for the British Columbia faithful. At the end of the 1964 season, defensive lineman Tom Brownwas named a CFL All-Star, a back-to-back Schenley award winner as CFL’s Most Outstanding Lineman Award, and won the Jeff Nicklin Memorial Trophy as the Most Valuable Player in the Western Conference. Joining Brown as All-Stars on defence were Mike Cacic, Dick Fouts, and Munsey. Joe Kapp and tackle Lonnie Dennis were named CFL All-Stars on offence.

Any hopes of the BC Lions becoming a dynasty team after their Grey Cup championship season quickly disappeared in 1965, as the team started to recede back to the basement of the Western Conference. Before the beginning of the season, By Bailey left the team and the entire roster was starting to age as the Lions finished the season with a 6–9–1 regular season record. As a result, the team missed the playoffs one year after being on top of the CFL world. It was clear that head coach Dave Skrien would never again experience the same success as he achieved the previous two seasons.