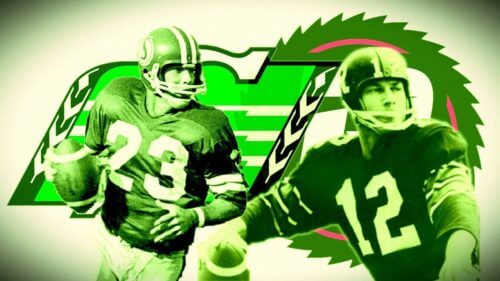 The 54th Grey Cup was hosted at Empire Stadium in Vancouver, British Columbia on November 26, 1966. The Saskatchewan Roughriders won their first Grey Cup after 53 years of competition for this trophy, after losing eight times. With Eagle Keys as head coach, the Roughriders defeated the Ottawa Rough Riders led by Frank Clair by a score of 29-14. George Reed was the MVP with 31 rushes for 133 yards and one rushing touchdown. Ottawa lost despite two TD passes of over 60 yards to the speedy long-ball threat Whit Tucker. The gooseneck or slingshot field goal posts, invented by Jim Trimble and Joel Rottman, were installed for this game, marking its first appearance in a football championship game. They made their debut a week earlier at Montreal’s new Autostade for the Eastern Conference finals. The game was called with four seconds left in regulation when fans swarmed the field in celebration.