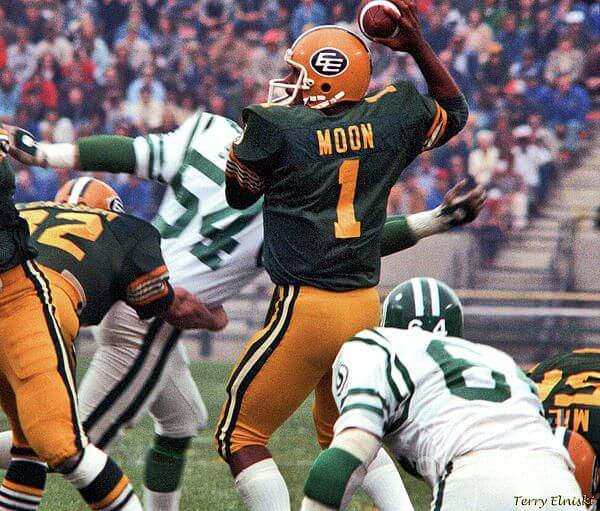 The 66th Grey Cup was played on November 26, 1978, before 54,695 fans at Exhibition Stadium at Toronto. The Edmonton Eskimos defeated the Montreal Alouettes in a close game, 20-13.

The 67th Grey Cup was played on November 25, 1979 before 65,113 fans at Olympic Stadium in Montreal. The Edmonton Eskimos defeated the Montreal Alouettes 17-9.

The 68th Grey Cup was played on November 23, 1980, before 54,661 fans at Exhibition Stadium in Toronto. The Edmonton Eskimos defeated the Hamilton Tiger-Cats 48–10 in one of the most lopsided victories in Grey Cup history.

The 69th Grey Cup was played on November 22, 1981, at the Olympic Stadium in Montreal, Quebec in front of 52,487 fans. The 1981 Grey Cup game is considered to be one of the ten best Grey Cup games of all time.[1] CFL football fans saw an unexpectedly exciting game, as the 22.5 point underdog Ottawa Rough Riders, sporting a woeful record of 5-11 (which is the worst record in CFL history by any Grey Cup finalist team), came within 3 seconds of denying the Edmonton Eskimos the title. The Esks, with a 14-1-1 record, were almost the victims of what would have been the biggest upset in the history of the Grey Cup. This was the final appearance in the Grey Cup game for the Ottawa Rough Riders, who folded in 1996. A team from Ottawa would not return to the Grey Cup until 2015, when the second-year Redblacks faced off, incidentally, against the Edmonton Eskimos. Canadian Football Hall of Fame legends Tom Wilkinson (Edmonton) and Tony Gabriel (Ottawa) played their final game in the 69th Grey Cup as did veteran Edmonton centre Bob Howes. Future US Congressman J.C. Watts was Ottawa’s quarterback. He won the Grey Cup Most Valuable Player (Offensive) award.

The 70th Grey Cup, also known as the “Rain Bowl”, was the 1982 Grey Cup Canadian Football League championship game between the Toronto Argonauts and the Edmonton Eskimos. The Eskimos, who were making their sixth consecutive appearance in the CFL championship game, defeated the Argonauts 32-16 on the Eskimos’ way to their fifth straight Grey Cup. The game was played on Sunday, November 28, 1982, at Exhibition Stadium in Toronto.