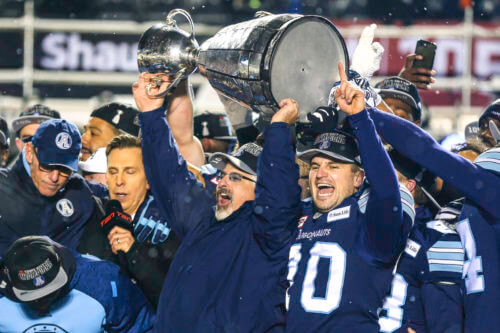 The 92nd Grey Cup game took place on November 21, 2004, at Frank Clair Stadium in Ottawa, Ontario. The game decided the championship of the 2004 Canadian Football League season. The Toronto Argonauts defeated the BC Lions 27-19.

This is the first Grey Cup game to be played on the next-generation FieldTurf surface.

The Argonauts defeated the Stampeders 35–22 to win their sixteenth Grey Cup title.

This was the third meeting between Calgary and Toronto for the Grey Cup championship and the first since the 79th Grey Cup in 1991. This was also the second consecutive year that the Grey Cup game involved, and was won by, the team from the host city. The result of the game also meant that Argonauts owner David Braley became the first team owner to win back-to-back Grey Cups with two different teams; Braley also owned the 2011 champions, the BC Lions (Braley has since sold the Toronto Argonauts). Over 5.8 million viewers watched the game, with roughly 5.5 million originating from English Canada, making the game the most-watched Grey Cup ever recorded on English-language television.

The 105th Grey Cup was played on November 26, 2017, between the Calgary Stampeders and the Toronto Argonauts at TD Place Stadium in Ottawa, Ontario.