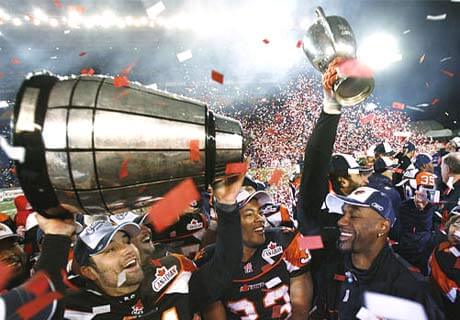 The 99th Grey Cup was a Canadian football game between the East Division champion Winnipeg Blue Bombers and the West Division champion BC Lions to decide the champion of the Canadian Football League in the 2011 season. The Lions defeated the Blue Bombers 34–23 and became the first team in CFL history to win the Grey Cup after starting the season with five straight losses. They also became the first team to win the championship game at home since the 1994 Lions did it in the 82nd Grey Cup, and were only the fourth team in the modern era to do so. This, a rematch of the 76th Grey Cup, was the second time that these two teams met for the championship.

The game took place on November 27, 2011, at BC Place Stadium in Vancouver, British Columbia. This was the eighth Grey Cup game played at BC Place, and the 15th in Vancouver, the most recent previous one having been the 93rd Grey Cup between the Montreal Alouettes and Edmonton Eskimos.