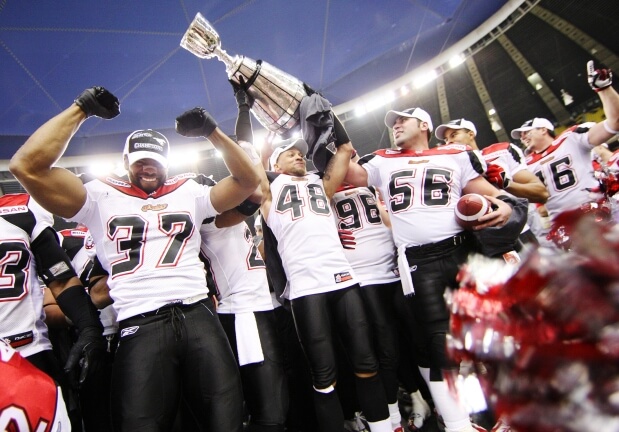 The 89th Grey Cup (Canadian Football League championship) was held in 2001 in Montreal. The Calgary Stampeders claimed their fifth championship in team history with a 27–19 win over the East Division champions and heavily favoured Winnipeg Blue Bombers.

The 96th Grey Cup was held in Montreal, Quebec at Olympic Stadium on November 23, 2008. The Eastern Division Champion Montreal Alouettes hosted the Western Division Champion Calgary Stampeders. The Stampeders won the game 22-14, with quarterback Henry Burris winning the MVP award. It was the first time Montreal had hosted the Grey Cup since 2001, the first time since the 2002 Grey Cup that the host city played for the Grey Cup, and the first time since the 58th Grey Cup in 1970 that the Alouettes and Stampeders had met for the national championship.[1] Hoping to break the record for highest attendance for a Grey Cup game, the organizers expanded Olympic Stadium to almost 70,000 seats. A crowd of 66,308 attended the game, failing to break the record of 68,318 set in 1977, but good enough to be the second-highest attended Grey Cup game of all time. Montreal has now played host to the four highest-attended Grey Cup games in history. As of the end of the 2017 CFL season, this is the last time a Western-based team has won the Grey Cup in Eastern Canada.