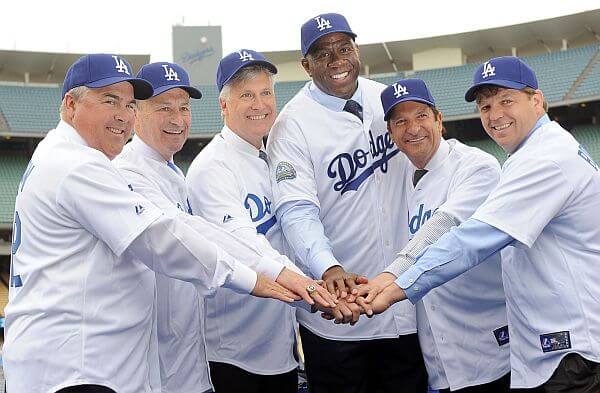 On March 27, 2012, it was announced that an agreement had been reached on the sale of the Dodgers between Frank McCourt and Guggenheim Baseball Management LLC, a group of investors fronted by Guggenheim CEO Mark Walter and including former Los Angeles Lakers player Magic Johnson, baseball executive Stan Kasten, and film mogul Peter Guber. The total sale price for the Dodgers (which includes Dodgers Stadium) exceeded $2 billion, making the sale the largest for a professional sports team in history, exceeding the approximately $1.5 billion purchase of Manchester United F.C. by Malcolm Glazer in 2005, On the same day, it was also announced that the members of the group will partner McCourt in purchasing the property surrounding the stadium. The sale price of the Dodgers was considered to be far higher than what the team was actually worth at the time of sale. Estimates made by Forbes placed the value of the Dodgers at approximately $1.4 billion, and the winning bid was more than 30% higher than the next highest bid. On April 13, the sale was approved by the bankruptcy court and it officially closed on May 1, 2012.