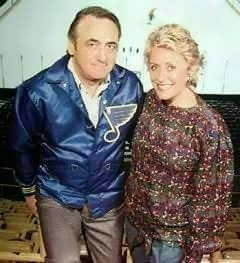 Purina lost an estimated $1.8 million a year during its six-year ownership of the Blues, but took the losses philosophically, having taken over out of a sense of civic responsibility. In 1983, Purina’s longtime chairman, R. Hal Dean, retired. His successor wanted to refocus on the core pet food business and had no interest in hockey. He saw the Blues as just another money-bleeding division and put the team on the market. The Blues did not pick anyone in the 1983 NHL Entry Draft because Purina did not send a representative; the company basically abandoned the team. It finally found a buyer in a group of investors led by WHA and Edmonton Oilers founder Bill Hunter, who then made plans to move the team to Saskatoon, Saskatchewan. However, the NHL was unwilling to lose a market as large as St. Louis and vetoed the deal. Purina then padlocked the Checkerdome and turned the team over to the league. The team appeared destined for contraction when, on July 27, 1983, Harry Ornest, a Los Angeles-based businessman, came in at the 11th hour to save the franchise. Ornest immediately reverted the name of the team’s home to the St. Louis Arena.