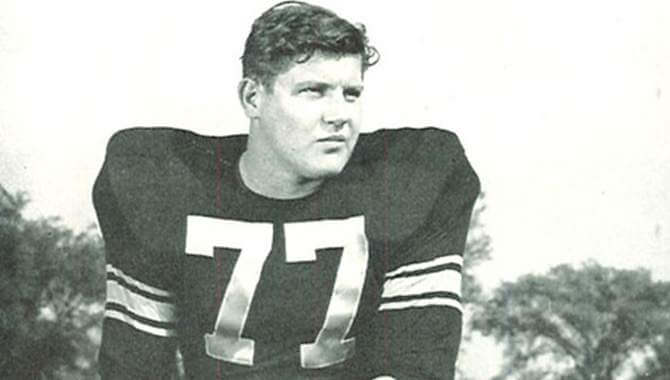 Karras struggled in the beginning at Iowa, with classwork, homesickness, and with his coach, Forest Evashevski. He was a pledge at the Sigma Nu fraternity during his first year in school. Karras probably would have left Iowa had he not befriended a Greek theater owner, Ernie Pannos, as well as fellow players Cal Jones and Bob Commings. Karras’ sophomore year with Iowa in 1955 got off to a rocky start when he showed up for practice twenty pounds (9 kg) overweight. Karras was also hampered that season by a cracked ankle bone. After being disappointed at not getting to play in the season finale, Karras threw a shoe at Evashevski and quit the team. Karras did not earn a football letter for the 1955 season.

Karras went to summer classes and later rejoined the football team, but a strained relationship resurfaced. Evashevski promised to start Karras in the 1956 season opener against Indiana, when he would square off against his brother, Ted. But Evy played Karras off the bench instead, and Karras quit the team again. This time, Karras agreed to rejoin the team only after making Evashevski promise he would not talk to him other than in a coaching capacity. (Evashevski always denied any special agreement with Karras.) Iowa took the lead in the 1956 Big Ten title race with a 7–0 victory over Minnesota. The Hawkeyes then clinched the Big Ten title and Iowa’s first-ever Rose Bowl berth by defeating Ohio State, 6–0. Karras sealed the game with a sack on the game’s final play.

Iowa’s final regular-season game in 1956 was a 48–8 win at home over a struggling Notre Dame team. Karras called it his biggest college win, saying, “The Karrases have always had a rivalry with Notre Dame. The school was just sixty miles (97 km) down the road from our home and we wanted to beat ’em at anything.” However, after the game, Karras got into a physical battle with Evashevski. Karras did not enjoy his trip to the Rose Bowl, either. “Pasadena was the most boring town I’ve ever been in,” said Karras. Karras helped the Hawkeyes win the Rose Bowl over Oregon State, 35–19. He was a first-team All-American in 1956