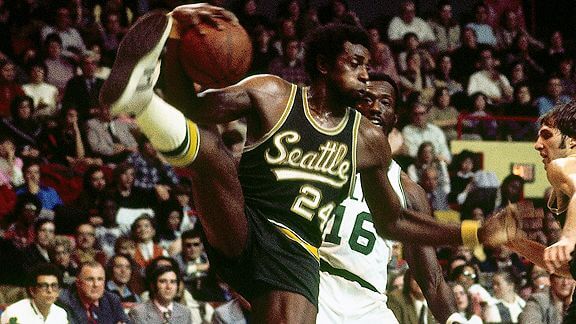 Haywood’s spectacular 1969 – 1970 rookie season gave Rockets fans cause for optimism for the 1970 – 1971 season . But, the season turned out to be a disaster for the franchise. In the fall of 1970, Haywood played only two exhibition games for the Rockets (scoring over 40 points in each). After those two games, he bolted the team because of a contract dispute. Haywood was upset because much of his salary was in the form of deferred (future) payments. The Rockets refused to restructure his contract, and Haywood decided to jump to the Seattle SuperSonics of the NBA. The Rockets filed several lawsuits to keep Haywood in Denver. For months, the Rockets stubbornly held out hope that Haywood would return to the team (for much of the 1970 – 1971 season, Rockets game programs still contained Haywood’s name in the lineup section). Denver eventually relented, and Haywood played 33 games for the Sonics in the spring of 1971.