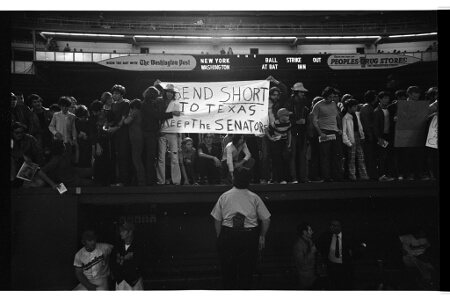 Short was especially receptive to an offer brought up by Arlington, Texas mayor Tom Vandergriff, who had been trying to obtain a Major League sports team to play in the Metroplex for over a decade. Years earlier, Charles O. Finley, the owner of the Kansas City Athletics, sought to relocate his baseball team to Dallas, Texas, but the idea was rebuffed and ultimately declined by the other A.L. team owners.

Arlington’s hole card was Turnpike Stadium, a 10,000-seat park that had been built in 1965 to house the AA Dallas-Fort Worth Spurs of the Texas League. However, it had been built to Major League specifications and also located in a natural bowl, meaning only minor excavations would be necessary to expand the park to accommodate Major League crowds.

After Vandergriff offered a multimillion-dollar down payment, Short decided to make the move to Arlington. On September 21, 1971, by a vote of 10 to 2 (the Orioles’ Jerold Hoffberger and John Allyn of the Chicago White Sox registered the dissenting votes), American League owners granted approval to move the franchise to Arlington, Texas for the 1972 season.

Senators fans were livid. Enmity came to a head at the club’s last game in Washington. Thousands of fans simply walked in without paying after the security guards left early, swelling the paid attendance of 14,460 to around 25,000, while fans unfurled a banner reading “SHORT STINKS”. With the Senators leading 7–5 and two outs in the top of the ninth inning, several hundred youths stormed the field, raiding it for souvenirs. One man grabbed the first base and ran off with it. With no security in sight and only three bases, umpire crew chief Jim Honochick forfeited the game to the New York Yankees.