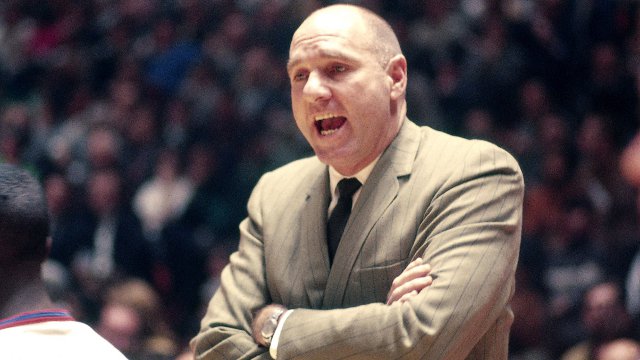 The Rockets’ front office tried to bring the franchise back to respectability by hiring venerable Alex Hannum (left) as head coach (and General Manager) for the 1971 – 1972 season. Hannum immediately overhauled the team’s entire image: the team colors (and uniforms) were changed from orange and black to columbine blue and yellow (the colors of the columbine, Colorado’s state flower). Hannum signed two more promising rookies, Dave Robisch an All-American center out of Kansas) and Marv Roberts (an All-American forward out of Utah State). The Rockets’ new slogan was “New in ’72.” With Hannum’s structured offensive patterns (and stingy defense), the Rockets were certainly new, but they weren’t much better (at least during the regular season). They showed some promise but finished 16 games below .500 (at 34-50). Simpson had a career-best year scoring-wise, averaging 27.4 points per game. He was named Second Team All-ABA. Guard Larry Brown, who had been acquired from the Squires the year before, was the team’s capable ball-handler. Brown finished third in the league in assists, with 7.2 per game.