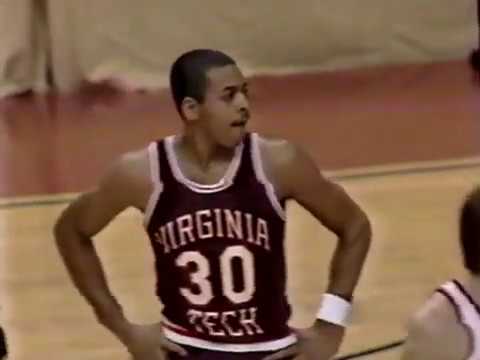 Curry was a four-year starter at Virginia Tech in Blacksburg along with contemporaries Bobby Beecher, Perry Young, Al Young, and Keith Colbert. The Hokies appeared in the National Invitation Tournament (NIT) in 1983 and 1984, finishing third in the latter. Although the team qualified for at-large bids to the NCAA tournament in 1985 and 1986, it lost in the first round on both occasions. In his senior season in 1986, Curry was named the player of the year in the Metro Conference. Prior to the 1986–87 season, NCAA basketball did not feature a three-point line; Curry’s accurate long-range shooting was not rewarded, as it would be later in his NBA career. (In the early and mid-1980s, the three-point line was introduced in many conferences at varying distances, but it was not recognized by the NCAA.)

Curry also played baseball for Virginia Tech. He was selected by the Baltimore Orioles in the 14th round of the 1985 MLB draft but opted to continue playing basketball.

Curry finished his Virginia Tech career with 2,389 points (second all-time) and 295 steals (all-time leader) in basketball, and a 6–1 record with a 3.81 ERA in baseball.

He was inducted into the Virginia Tech Sports Hall of Fame in 1996, his first year of eligibility.