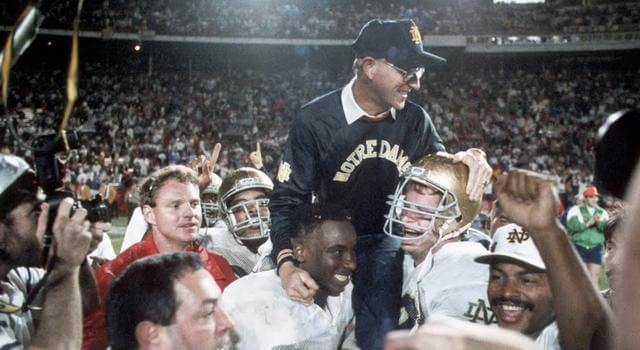 In contrast to Faust, Holtz was well known as a master motivator and a strict disciplinarian. The tone was set with Holtz’s first meeting with his team as Irish head coach in 1986, immediately demanding his players sit up straight in their chairs and look him in the eye as he spoke. He displayed the latter trait in spades when two of his top contributing players showed up late for dinner right before the then top-ranked Irish played second-ranked USC in the final regular-season game of 1988. In a controversial move, coach Lou Holtz took his 10–0 Irish squad to Los Angeles without stars Ricky Watters and Tony Brooks, who he suspended for disciplinary reasons. This was not the first time these players had gotten into trouble and the players had been warned there would be serious consequences if it happened again. His move was vindicated when the Irish defeated USC anyway. Holtz was named national coach of the year (Paul “Bear” Bryant Award) in 1988, the same season he took Notre Dame to an upset of No. 1 Miami in the Catholics vs. Convicts series and a win over No. 3 West Virginia in the Fiesta Bowl, thus capturing the national championship. The Irish finished a perfect 12–0 in 1988, its last undefeated season and a national championship to date.