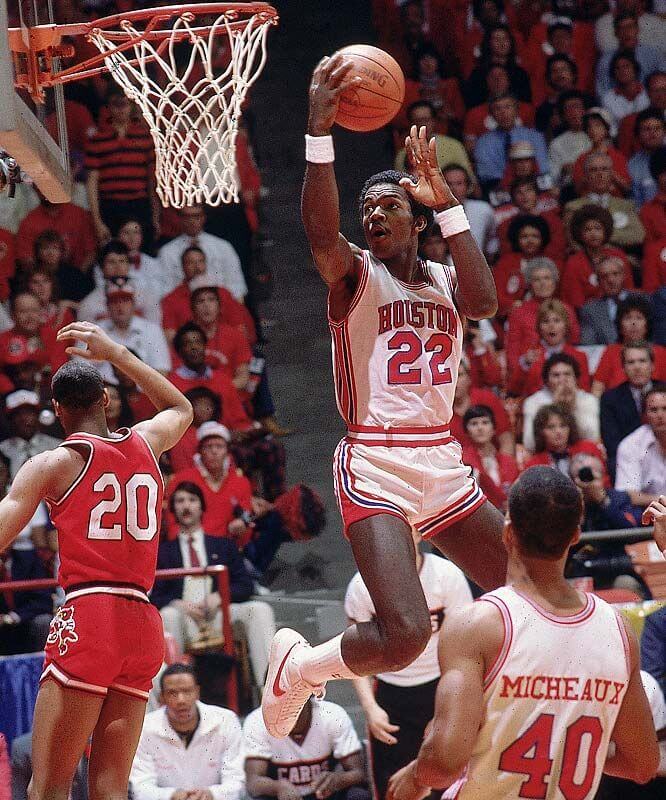 Drexler and Young, along with Larry Micheaux and new recruit Hakeem Olajuwon (known then as Akeem Olajuwon), comprised the “Phi Slama Jama” basketball fraternity that gained national attention for its acrobatic, above-the-rim play. New players were “initiated” into the fraternity by having to stand underneath the basket as Drexler drove in from halfcourt and threw down a tomahawk slam over them. Houston made the first of Drexler’s two straight Final Four appearances in 1982, where they lost to eventual champions, North Carolina. He averaged 15.2 points and 10.5 rebounds (second in the Southwest Conference) per game as a small forward as Houston finished 25–8.

The 1982–83 campaign saw Houston return to the Final Four ranked No. 1. They were matched up against No. 2 Louisville and the “Doctors of Dunk” in the semifinals, which Houston won 94–81 following a brilliant dunking display by both sides, including a double-pump slam by Drexler that Sports Illustrated writer Curry Kirkpatrick called “your basic play of the century.” He finished with 21 points, seven rebounds, and six assists, but in the championship game against North Carolina State, Drexler failed to make an impact after picking up four fouls before halftime and scored only four points on one-of-five shooting and two free throws in NC State’s upset victory.

Drexler declared for the NBA draft as a junior, leaving Houston with career averages of 14.4 points, 3.3 assists, and 9.9 rebounds in three seasons. In addition to being named the Southwestern Conference Player of the Year and a first-team All American his final season, he remains the only player in school history with combined totals of at least 1,000 career points, 900 rebounds, and 300 assists, in addition to being Houston’s all-time steals leader with 268.