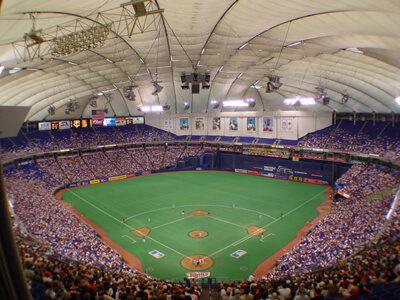 In 1982, the Twins moved into the Hubert H. Humphrey Metrodome, which they shared with the Minnesota Vikings, but the team continued to struggle. The Hubert H. Humphrey Metrodome, commonly called the Metrodome, was a domed sports stadium located in downtown Minneapolis, Minnesota, United States. Opened in 1982, it replaced Metropolitan Stadium, which was on the current site of the Mall of America in Bloomington, and Memorial Stadium on the University of Minnesota campus.