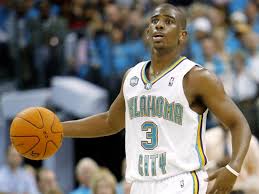 Because of the catastrophic devastation brought by Hurricane Katrina upon the communities of southeastern Louisiana, the Hornets franchise temporarily relocated its base of operations to Oklahoma City, Oklahoma, in 2005 – 2006 and 2006 – 2007, posting records of 38–44 and 39–43 respectively. During this time, the franchise was known as the New Orleans/Oklahoma City Hornets. In these two seasons, most home games were played at the Ford Center in Oklahoma City, while a few remained at New Orleans Arena. One year after the Hornets moved back to New Orleans permanently, the Seattle SuperSonics relocated to Oklahoma City and became the Thunder.