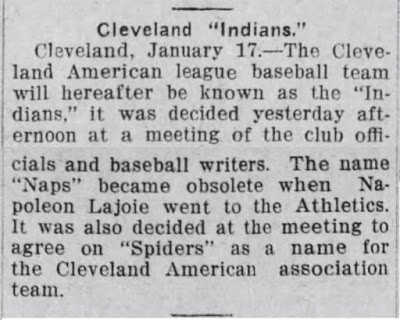 With Lajoie gone, the Molly McGuires now needed a new nickname. Somers asked the local newspapers to come up with a new name and based on their input, the team was renamed the Cleveland Indians. Legend has it that the team honored Louis Sockalexis when it assumed its current name in 1915. Sockalexis, a Native American, had played in Cleveland 1897 – 1899. Research indicates that this legend is mostly untrue and that the new name was a play on the name of the Boston Braves, then known as the “Miracle Braves” after going from the last place on July 4 to a sweep in the 1914 World Series.