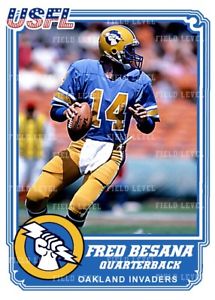 Oakland had been without a football team after the Oakland Raiders relocated to Los Angeles before the 1982 NFL season. The Invaders stepped in to fill the void; the similar name was no accident.

The team was originally owned by Bay Area real estate magnates Jim Joseph and Tad Taube. However, after the original owner of the USFL’s Los Angeles franchise, Alex Spanos, bought the San Diego Chargers instead, Joseph and Taube flipped a coin to decide who would buy the Los Angeles rights. Joseph won the toss, selling his stake in the Invaders to Taube. As it turned out, Joseph was forced to move his team to Phoenix, Arizona as the Arizona Wranglers.