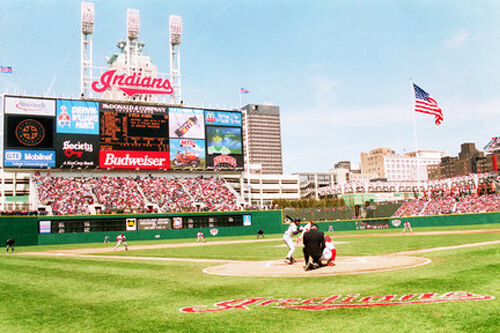 Throughout the 1980s, the Indians’ owners had pushed for a new stadium. Cleveland Stadium had been a symbol of the Indians’ glory years in the 1940s and 1950s. However, during the lean years, even crowds of 40,000 were swallowed up by the cavernous environment. The old stadium was not aging gracefully; chunks of concrete were falling off in sections and the old wooden pilings now petrified.[63] In 1984, a proposal for a $150 million domed stadium was defeated in a referendum 2–1.

Finally, in May 1990, Cuyahoga County voters passed an excise tax on sales of alcohol and cigarettes in the county. The tax proceeds would be used to finance the building of the Gateway Sports and Entertainment Complex which would include Jacobs Field and Gund Arena for the Cleveland Cavaliers basketball team. The team had new ownership and a new stadium on the way.

Progressive Field is a baseball park located in downtown Cleveland, Ohio. It is the home field of the Cleveland Indians of Major League Baseball, and together with Quicken Loans Arena, is part of the Gateway Sports and Entertainment Complex. It was ranked as Major League Baseball’s best ballpark in a 2008 Sports Illustrated fan opinion poll.

The ballpark was named Jacobs Field after team owners Richard and David Jacobs, from its inaugural season in 1994 until 2008, when its name was changed to Progressive Field after its naming rights were purchased by locally-based Progressive Insurance Company. The ballpark is sometimes referred to as “The Jake,” based on its original name.