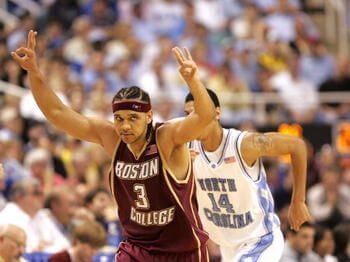 During his college years, Dudley played with the Boston College Eagles. During the 2004–05 season, Dudley helped the Eagles start 20–0, as they finished 25–5. Dudley was a four-year starter for the Eagles and played in every BC game in his first three years. He had a streak of over 100 consecutive starts snapped when he suffered a stress fracture in December 2006. During his final season, he was the team’s leading scorer and rebounder and was one of two captains alongside fellow senior Sean Marshall. In his college days, he earned the nickname “Junkyard Dog” for his toughness and nose for the ball.

He scored 30 points on November 29, 2006, against Michigan State on national television. His career-high in points is 36, which he scored against Villanova in a January 19, 2005 victory during his sophomore season. He averaged 19 points and 3 assists per game during his senior year.

After his senior season, Dudley has voted the ACC Player of the Year for 2007 and was a second-team All-American.