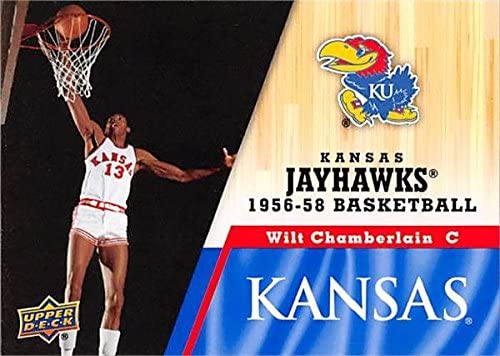 On December 3, 1956, Chamberlain made his varsity debut as a center. In his first game, he scored 52 points and grabbed 31 rebounds, breaking both all-time Kansas records in an 87–69 win against Northwestern, who had Chamberlain’s future NBA teammate Joe Ruklick. Teammate Monte Johnson testified to his athleticism: “Wilt … had unbelievable endurance and speed … and was never tired. When he dunked, he was so fast that a lot of players got their fingers jammed [between Chamberlain’s hand and the rim].” Reportedly, Chamberlain also broke Johnny Kerr’s toe with a slam dunk. By this time, he had developed several offensive weapons that became his trademarks: his finger roll, his fade-away jump shot, which he could also hit as a bank shot, his passing, and his shot-blocking. Leading a talented squad of starters, including Maurice King, Gene Elstun, John Parker, Ron Lonesky and Lew Johnson, the Jayhawks went 13–1 until they lost a game 56–54 versus Oklahoma State, who held the ball the last three and a half minutes without any intention of scoring a basket, which was still possible in the days before the shot clock (introduced 1984 in the NCAA). As he did at Overbrook, Chamberlain again showcased his diverse athletic talent. He ran the 100-yard dash in 10.9 seconds, shot-putted 56 feet, triple jumped more than 50 feet, and won the high jump in the Big Eight track and field championships three straight years.

In 1957, 23 teams were selected to play in the NCAA Tournament. The Midwest Regional was held in Dallas, Texas, which at the time was segregated. In the first game, the Jayhawks played the all-white SMU team, and KU player John Parker later said: “The crowd was brutal. We were spat on, pelted with debris, and subjected to the vilest racial epithets possible.” KU won 73–65 in overtime, after which police had to escort the Jayhawks out. The next game against Oklahoma City was equally unpleasant, with KU winning 81–61 under intense racist abuse. In the semi-finals, Chamberlain’s Jayhawks handily defeated the two-time defending national champion San Francisco, 80–56, with Wilt scoring 32 points, grabbing 11 rebounds, and having at least seven blocked shots. (The game film is unclear whether an 8th block occurred, or the ball just fell short due to Chamberlain’s withering defensive intimidation). Chamberlain demonstrated his growing arsenal of offensive moves, including jump shots, put-backs, tip-ins, and his turnaround jump shot. He was far more comfortable and effective at the foul line than he would later be during his pro career. He had outstanding foot speed throughout the game, and several times led the fast break, including blocking a shot near the basket and then outracing the field for a layup. His stellar performance led Kansas to an insurmountable lead, and he rested on the bench for the final 3:45 remaining in the game.