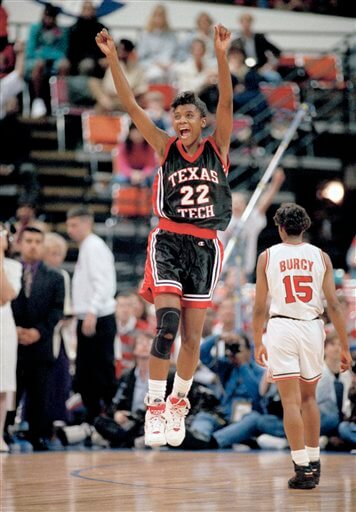 In 1993, Swoopes won the NCAA women’s basketball championship with the Texas Tech Lady Raiders during her senior season. Her jersey was retired by the school the following year, making her one of only three Lady Raiders to be honored in this way. The others are Carolyn Thompson and Krista Kirkland, Swoopes’ teammate from the 1993 championship team.

As of 2010, Swoopes was still a part of the women’s basketball record books in many categories, including single-game scoring record (53 points on March 13, 1993, vs. Texas, tied for tenth place), single-season scoring (955 points in the 1993 season, fourth place), highest championship tournament scoring average (35.4 in the 1993 tournament, second place), best single-game championship scoring performance (47 points vs. Ohio State, 1993 championship), which broke Bill Walton’s record, and scoring record for championship series (177 points, five games). She set the record for the most field goals in the championship game with 16.

Swoopes also set several school records at Texas Tech. She scored 0 points in the 1992–93 season, which is an all-time scoring record for a single season (as of 2006). Swoopes’ 24.9 points-per-game average for her career is the best in school history; she also boasts zero triple-doubles and 23 double-doubles, 14 of which came during her senior year.