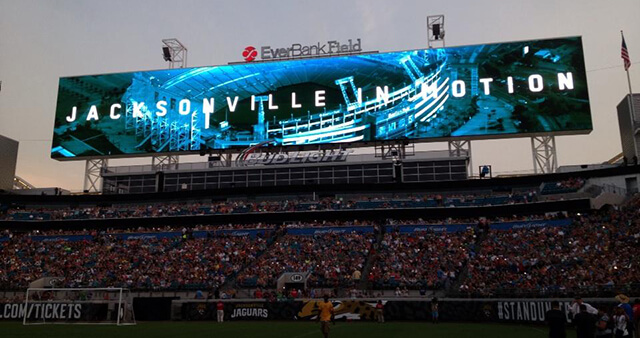 2013 - Largest Scoreboards in the World

In November 2013, Jacksonville’s City Council approved $63 million in improvements to EverBank Field. Renovations included two end zone video scoreboards 362-foot-long that are the largest HD LED of their kind in the world, a platform area in the north end zone with two wading pools, unique food and beverage offerings, interactive activities, and 55,000 square feet of HD video screens, which is a world record for a stadium. Construction of the platform resulted in the removal of approximately 7,000 seats, though temporary seating can be installed for major events that will require a larger stadium capacity. During the construction, a live webcam was set up to view the progress of the new video scoreboards. The scoreboards were publicly unveiled on July 26, 2014.