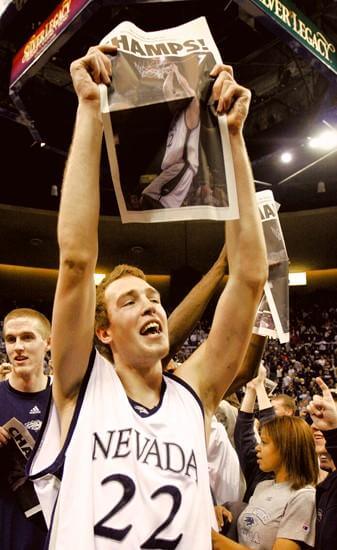 Fazekas was signed by the University of Nevada for the 2003-04 season. From that point forward, Fazekas led the Wolf Pack to four straight NCAA Tournament appearances during his matriculation, including a run to the Sweet 16 as a freshman. He became the school’s all-time leading scorer on November 18, 2006, when he surpassed the old record of 1,877 points scored by Edgar Jones in 1979. He also surpassed the single-season scoring record formerly set by Jones during the 2005-06 season. Fazekas also earned his third straight WAC Player of the Year for the 2006-07 season, a feat only matched by Utah’s Keith Van Horn, for whom Fazekas was later coincidentally waived to make space on the trade that brought point guard Jason Kidd to the Mavericks. On February 28, 2019, Nevada retired Fazekas’ number 22 in a ceremony at halftime of a win over UNLV. Fazekas became the second Wolf Pack basketball player to have his number retired, after Edgar Jones.