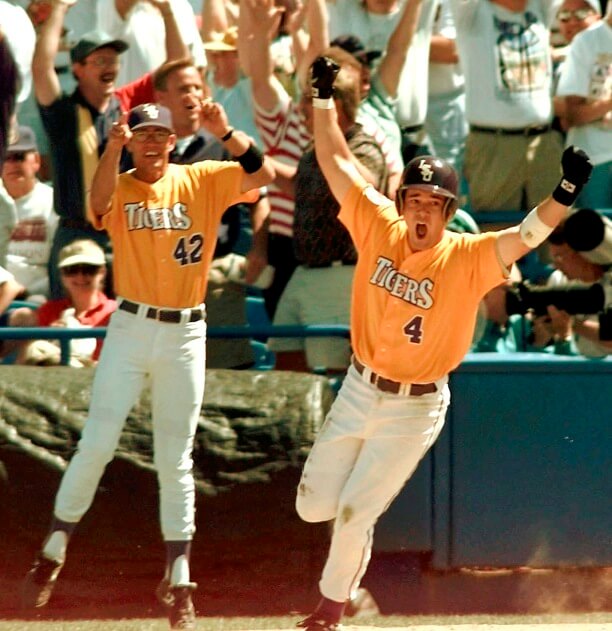 In 1996, the Tigers entered the NCAA Tournament on a two-game losing streak, after being eliminated from the SEC Tournament by consecutive losses to Florida and Kentucky. However, based on the team’s regular-season performance, LSU was selected as one of the eight regional host sites for the NCAA tournament. The Tigers defeated Austin Peay, UNLV, and New Orleans before defeating Georgia Tech, 29–13, in the regional final. In the game, LSU broke multiple NCAA records, two of which still stand today: 13 hits in an inning and 8 doubles in an inning.

In the College World Series, the team defeated its first opponent, Wichita State, 9–8. LSU then faced Florida, which had beaten them three times in the regular season and once in the SEC Tournament, and won, 9–4. Florida came out of the losers’ bracket to face LSU again, and LSU won, 2–1, to advance to the national championship game against Miami (FL).

In the game, LSU defeated Miami, 9–8, on a walk-off home run by Warren Morris. At the bottom of the 9th inning with two outs and the tying run on third base, Morris hit a home run to right field off of Miami freshman Robbie Morrison. The home run was Morris’s first of the season, and it won the 1997 Showstopper of the Year ESPY Award.