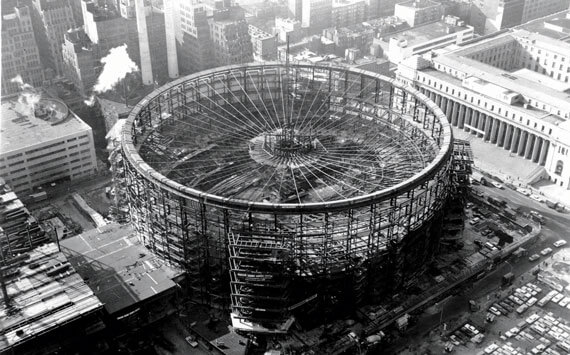 On February 11, 1968, the current Madison Square Garden (sometimes referred to as Madison Square Garden IV) opened after Irving M. Felt, who purchased the air rights from the Pennsylvania Railroad, tore down the above-ground portions of the original Pennsylvania Station. The new structure was one of the first of its kind to be built above the platforms of an active railroad station. It was an engineering feat constructed by Robert E. McKee of El Paso, Texas. Public outcry over the demolition of Pennsylvania Station structure an outstanding example of Beaux-Arts architecture led to the creation of the New York City Landmarks Preservation Commission. The Garden is located in the office and entertainment complex formally addressed as Pennsylvania Plaza and commonly known as Penn Plaza, named for the railroad station.

In 1991, Garden owners spent $200 million to renovate facilities and add 89 suites in place of hundreds of upper-tier seats. The project was designed by Ellerbe Becket.

Madison Square Garden’s $1 billion second renovation took place mainly over three offseasons. It was set to begin after the 2009 – 2010 hockey/basketball seasons, but was delayed until after the 2010 – 2011 seasons. Renovation was done in phases with the majority of the work done in the summer months to minimize disruptions to the NHL and NBA seasons. While the Rangers and Knicks were not displaced, the Liberty played their home games through the 2013 season at Prudential Center in Newark, New Jersey during the renovation.