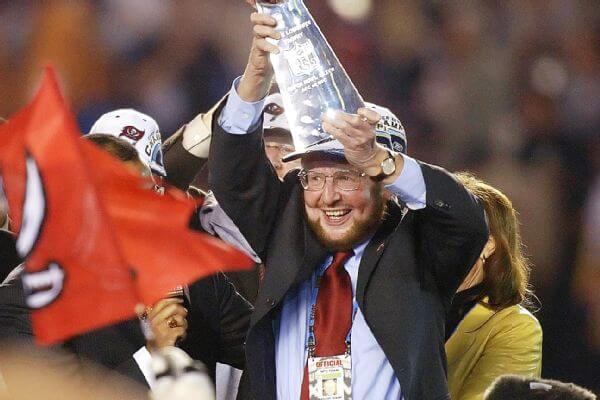 Despite the profitability of the Buccaneers in the 1980s, Culverhouse’s death in 1994 revealed a team close to bankruptcy, which surprised many observers. His son, Miami attorney Hugh Culverhouse, Jr., practically forced the trustees of his father’s estate to sell the team, which cast doubt on the future of the franchise in Tampa. Interested parties included New York Yankees owner George Steinbrenner and Baltimore Orioles owner Peter Angelos, the latter of whom publicly declared he would move the team to Baltimore, as the city did not have an NFL franchise at that time. However, in a last-minute surprise, Malcolm Glazer outbid both of them for $192 million, the highest sale price for a professional sports franchise up to that point. Glazer immediately placed his sons Bryan, Edward, and Joel in charge of the team’s financial affairs, and the family’s deep pockets and serious commitment to fielding a winning team finally allowed the Bucs to become competitive.