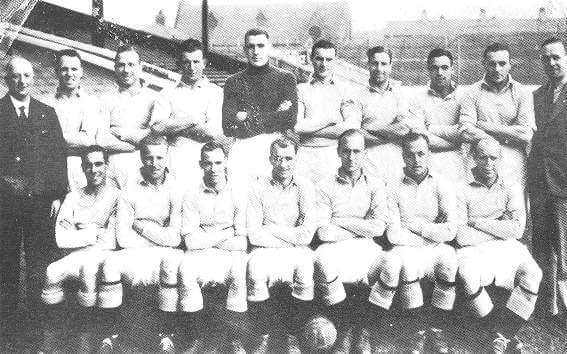 In the 1930s, Manchester City reached two consecutive FA Cup finals, losing to Everton in 1933, before claiming the Cup by beating Portsmouth in 1934. During the 1934 cup run, Manchester City broke the record for the highest home attendance of any club in English football history, as 84,569 fans packed Maine Road for a sixth-round FA Cup tie against Stoke City in 1934 – a record which stood until 2016. The club won the First Division title for the first time in 1937 but was relegated the following season, despite scoring more goals than any other team in the division. Twenty years later, a City team inspired by a tactical system known as the Revie Plan reached consecutive FA Cup finals again, in 1955 and 1956; just as in the 1930s, they lost the first one, to Newcastle United, and won the second. 1956 final, in which Manchester City beat Birmingham City 3–1, saw City goalkeeper Bert Trautmann continuing to play on after unknowingly breaking his neck.