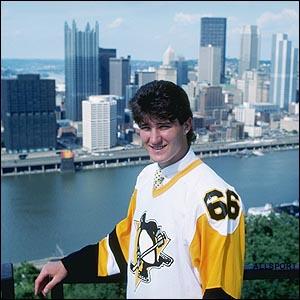 The team had the league’s worst record in both the 1983 and 1984 seasons, and with the team suffering financial problems, it again looked as though the Penguins would fold. Mario Lemieux, one of the most highly touted NHL draft picks in history, was due to be drafted in the 1984 NHL Entry Draft. Heading towards the end of the season ahead of the New Jersey Devils, who were placed last, the Penguins made a number of questionable moves that appeared to weaken the team in the short-term. The Penguins posted three six-game winless streaks in the last 21 games of the season and earned the right to draft Lemieux amidst protests from Devils management. Pittsburgh coach Lou Angotti later admitted that a conscious decision was made to finish the season as the team with the worst record, stating in an interview with the Pittsburgh Post-Gazette that a mid-season lunch prompted the plan, in light of the fact that there was a high chance of the franchise folding if Lemieux was not drafted. In particular, Angotti gave the example of a game the Penguins were winning 3–1, at which point general manager Eddie Johnston asked the coach “what are you doing?” in the first intermission of the game that was eventually lost 6–3. The Penguins were still, despite losing ten of their last twelve games, only two games away from losing Lemieux to the Devils. However, Angotti stated that he did not feel comfortable with the plan, even though it worked and saved the franchise. Other teams offered substantial trade packages for the draft choice, but the Penguins kept the pick and drafted Lemieux first overall.