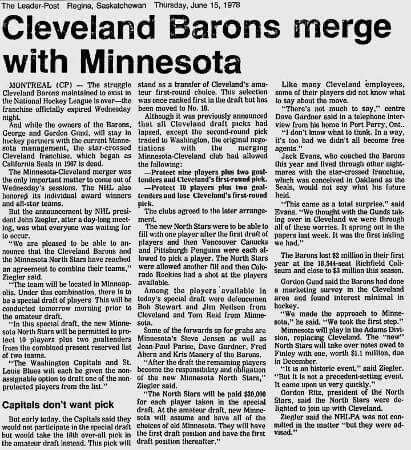 By 1978 the North Stars had missed the playoffs in five of the previous six seasons. Attendance had tailed off so rapidly that the league feared that the franchise was on the verge of folding. At this point, Gordon and George Gund III, owners of the equally strapped Cleveland Barons, stepped in with an unprecedented solution—merging the North Stars with the Barons. While the North Stars were the surviving team, the Gunds became majority owners of the merged team, and the North Stars moved from the then-five team Smythe Division to assume the Barons’ place in the Adams Division (which would otherwise have been left with only three teams) for the 1978 – 1979 season. The recently retired Nanne was named general manager, and a number of the Barons players – notably goaltender Gilles Meloche and forwards Al MacAdam and Mike Fidler – bolstered the Minnesota lineup. Furthermore, Minnesota had drafted Bobby Smith, who would go on to win the Calder Memorial Trophy as the NHL’s top rookie that year, and Steve Payne, who himself would go on to record 42 goals in his second campaign in 1979 – 1980.