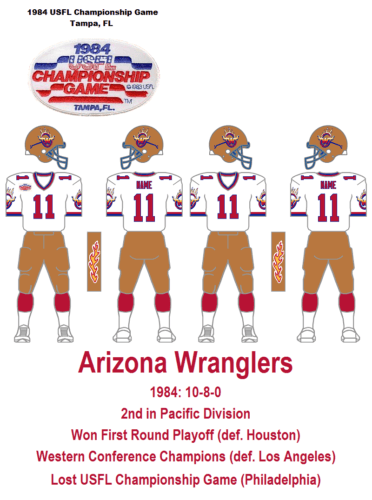 Joseph lost millions of dollars in the 1983 season. Like most of the other owners, he’d bought into the league knowing to expect years of losses. However, he was disappointed in the team’s attendance and unwilling to stick it out in Arizona.

In a stroke of luck for Joseph, Chicago Blitz owner Dr. Ted Diethrich (a Phoenix resident and founder of the Arizona Heart Institute) wanted a chance to move closer to his business interests in the Phoenix area. Despite fielding a team that had come up one game short of the USFL title game, the Blitz’ attendance had been lackluster at best. Diethrich had lost millions of dollars and didn’t believe those losses justified investment that far from home.

Diethrich thought he had a solution to both his and Joseph’s problems—an unprecedented swap of franchises. Diethrich sold the Blitz to fellow surgeon James Hoffman, then bought the Wranglers from Joseph. Allen, who had been chairman and head coach of the Blitz, took the same posts in Arizona. Hoffman and Diethrich then engineered a swap of assets in which the Blitz coaching staff and most of the Blitz players moved to Phoenix while most of the Wranglers roster moved to Chicago. (The most notable exception was that Wrangler quarterback Alan Risher stayed in Arizona to back up former Blitz quarterback Greg Landry). The deal allowed Allen to keep virtually all of the NFL veteran-loaded Blitz roster that he had painstakingly assembled in 1983.

The deal transformed the Wranglers from a cellar-dweller to a league powerhouse almost overnight. However, trading a team that had been, at worst, the third-best team in the league for a lesser version of one of the worst teams in the league raised questions about the USFL’s credibility—especially in Chicago. The Blitz would never recover and would be effectively euthanized at the end of the season (Eddie Einhorn was awarded a replacement Chicago franchise, but it never played a down).

While the USFL was active, the league considered the 1983 and 1984 Wranglers to be the same franchise, even though almost all the players were different.