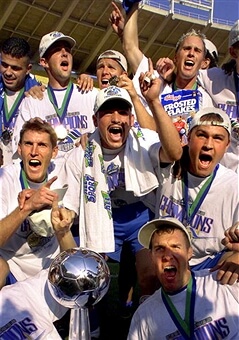 In 2000, their first full season under Bob Gansler, the Wizards opened the season on a 12-game unbeaten streak. Goalkeeper Tony Meola recorded an MLS record shutout streak at 681 minutes and 16 shutouts and won MLS Goalkeeper of the Year and MLS MVP. Peter Vermes was named 2000 MLS Defender of the Year. The Wizards finished the 2000 regular season 16–7–9, the best record in the league, winning the MLS Supporters’ Shield.

In the 2000 playoffs, fell behind 4 to 1 to the LA Galaxy, but Miklos Molnar scored a penalty kick in game three to send the series into a tiebreaker, where he scored again to send the Wizards to their first MLS Cup. At RFK Stadium in Washington, D.C., the Wizards, with the league’s best defense, faced the team with the league’s best offense, the Chicago Fire. The Wizards took the lead on an 11th-minute goal by Miklos Molnar. The Fire put ten shots on goal, but Tony Meola and the defense held, and the Wizards claimed their first MLS Cup Championship. Tony Meola was named 2000 MLS Cup MVP.