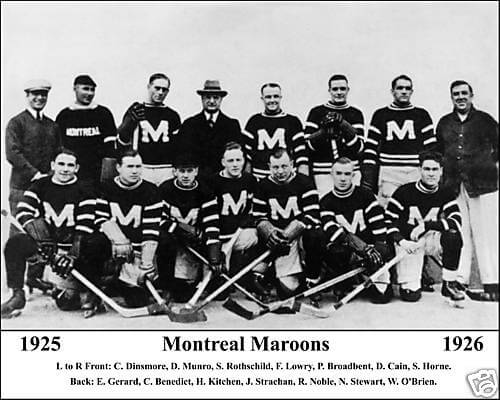 The Montreal Maroons hockey team was created to appeal to the anglophone neighborhoods of Montreal. On January 2, 1918, the Montreal Arena, shared by the Montreal Canadiens and the Montreal Wanderers, burnt down. The Canadiens, who drew primarily Montreal’s francophones, moved to the Jubilee Arena which, in 1919, also burnt down, before settling in the Mount Royal Arena, which had natural ice and seating for 3,250. The Wanderers, team of Montreal’s anglophone community, folded. By 1922, work began to build a team to appeal to the anglophones and return to the NHL. In July 1924, construction began on a new arena, on the site of a former roller-skating rink known as the Forum. By fall, at a cost of $1.5 million, the Montreal Forum was complete. The Montreal Forum was the first large arena in the NHL. The Maroons joined the NHL in 1924, along with the Boston Bruins. The Canadiens initially objected to a second team in Montreal, but relented when compensated by the expansion fee. The expansion fees for each team was $15,000. $11,000 of the Maroons’ fee went to their local rivals, the Canadiens. Their owner was unconcerned with having a second franchise in the same city; rather, he would later state, he “saw in them an important and lucrative local rivalry.”