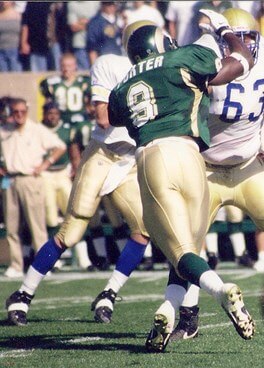 While attending Colorado State University, Porter was a standout on the football field for the Colorado State Rams football team. He began his college career as an H-back and did not see his first action on the defensive line until his junior year. He was a third-team All-American and All-Western Athletic Conference first-team selection by The Sports Network. He registered 22 career sacks. As a senior, he recorded 53 tackles (36 solos) with eight quarterback pressures and 12 tackles-for-losses. He finished third in National Collegiate Athletic Association (NCAA) Division I-A with a school single-season record-tying 15 sacks for minus 63 yards. He majored in exercise and sport science. He is a member of the Phi Beta Sigma fraternity.