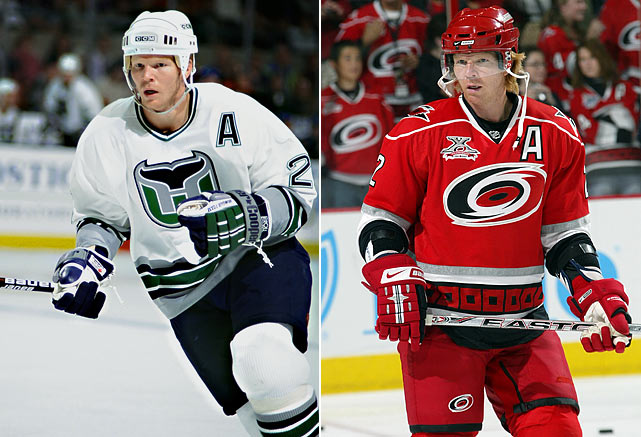 Despite assurances made when he purchased the team in 1994 that the Whalers would remain in Hartford at least through 1998, in March 1997 owner Peter Karmanos announced that the team would move elsewhere after the 1996 – 1997 season because of the team’s inability to negotiate a satisfactory construction and lease package for a new arena in Hartford. On May 6, 1997, Karmanos announced that the Whalers would move to the Research Triangle area of North Carolina and the new Entertainment and Sports Arena in Raleigh. Due to the relatively short time frame for the move, Karmanos himself thought of and decided upon the new name for the club, the Carolina Hurricanes, rather than holding a contest as is sometimes done. Later that summer, the team dropped the Whalers’ colors of blue, green, and silver for a new black-and-red scheme, matching the colors of the North Carolina State University Wolfpack, with whose men’s basketball team they would share the arena in Raleigh. In defiance of all geographic reality, the Hurricanes inherited the Whalers’ place in the Northeast Division.