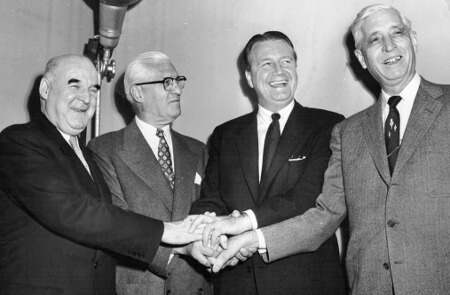 In 1954, Chicago real estate magnate Arnold Johnson bought the Philadelphia Athletics and moved them to Kansas City. Although he was initially a hero for making Kansas City a major-league town, it soon became apparent that he was motivated more by profit than any regard for the baseball fans of Kansas City. He had long been a business associate of New York Yankees owners Dan Topping, Larry MacPhail and Del Webb, and had even bought Yankee Stadium in 1953, though the league owners forced Johnson to sell the property before acquiring the Athletics. He’d also bought Blues Stadium in Kansas City, home of the Yankees’ top farm team, the Kansas City Blues of the American Association. After Johnson got permission to move the A’s to Kansas City, he sold Blues Stadium to the city, which renamed it Kansas City Municipal Stadium and leased it back to Johnson. The lease gave Johnson a three-year escape clause if the team failed to draw one million or more customers per season. The subsequent lease signed in 1960 also contained an escape clause if the team failed to draw 850,000 per season.