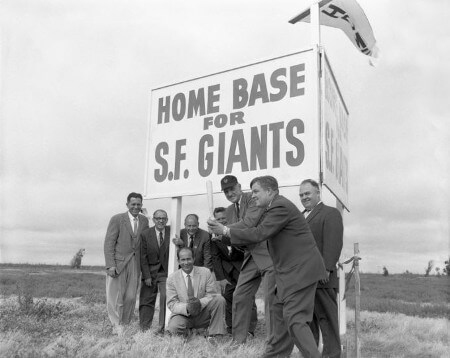 The Giants’ final three years in New York City were unmemorable. They stumbled to third place the year after their World Series win, and attendance fell off precipitously. While seeking a new stadium to replace the crumbling Polo Grounds, the Giants began to contemplate a move from New York, initially considering Metropolitan Stadium in Bloomington, Minnesota, which was home to their top farm team, the Minneapolis Millers. Under the rules of the time, the Giants’ ownership of the Millers gave them priority rights to a major league team in the area. But the Washington Senators wound up there as the Minnesota Twins in 1961.

At this time, the Giants were approached by San Francisco mayor George Christopher. Despite objections from shareholders such as Joan Whitney Payson, majority owner Horace Stoneham entered into negotiations with San Francisco officials around the same time the Dodgers’ owner Walter O’Malley was courting the city of Los Angeles. O’Malley had been told that the Dodgers would not be allowed to move to Los Angeles unless a second team moved to California as well. He pushed Stoneham toward relocation, and so in the summer of 1957, both the New York Giants and Brooklyn Dodgers announced their moves to California, ending the three-team golden age of baseball in New York City.

New York would remain a one-team town with the New York Yankees until 1962 when Joan Payson founded the New York Mets and brought National League baseball back to the city. Owners Payson and M. Donald Grant, who became the Mets’ chairman, had been the only Giants board members to vote against the Giants’ move to California. The “NY” script on the Giants’ caps and the orange trim on their uniforms, along with the blue background used by the Dodgers, would be adopted by the Mets, honoring their New York NL forebears with a blend of Giants orange and Dodgers blue.