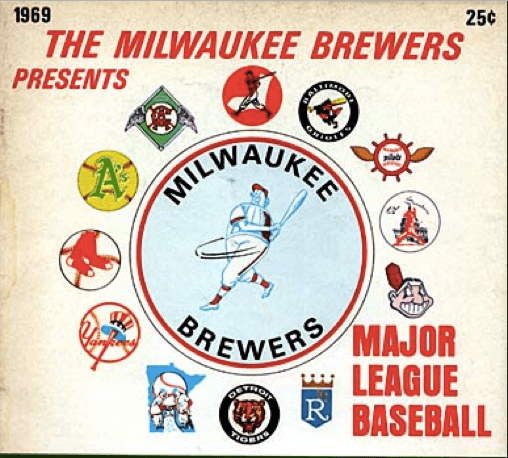 Federal Bankruptcy Referee Sidney Volinn declared the Pilots bankrupt on April 1, six days before Opening Day – clearing the way for them to move to Milwaukee. The team’s equipment had been sitting in Provo, Utah with the drivers awaiting word on whether to drive toward Seattle or Milwaukee. With the season’s opening day only six days away, there was not enough time to order completely new uniforms, so the club had to remove the Pilots logo from team uniforms and replace them with Brewers logos. In fact, the outline of the old Pilots logo could still be seen on the Brewers’ uniforms. Selig’s original intention had been to adopt navy and red as the team colors, hearkening back to the minor league club souvenir buttons sold at White Sox games at County Stadium featured the major league club’s logo in that color combination, but with no time to order new uniforms, the Brewers adopted the blue and gold of the Pilots as their own. That color combination, in various shades, is still used by the club. The short notice along with their geographical location also forced the Brewers to assume the Pilots’ old place in the AL West. While this resulted in natural rivalries with the White Sox and Twins, it also meant the Brewers faced some very long road trips, traveling to the Angels and Athletics for three series each per season.