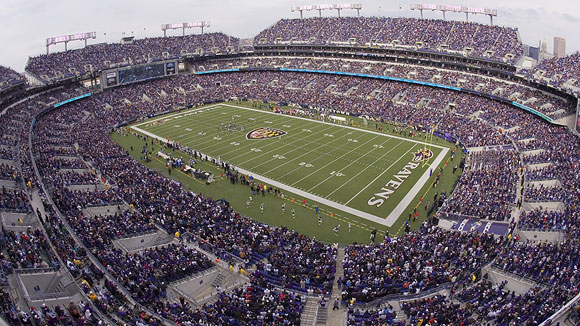 M&T Bank Stadium is a multi-purpose football stadium located in Baltimore, Maryland. It is the home of the Baltimore Ravens of the National Football League. The stadium is immediately adjacent to Oriole Park at Camden Yards, the home of the Baltimore Orioles. Often referred to as “The Bank”, M&T Bank Stadium officially opened in 1998, and is currently one of the most praised stadiums in the NFL for fan amenities, ease of access, concessions and other facilities. The stadium was originally known as Ravens Stadium at Camden Yards, until ISP PSINet acquired the naming rights in 1999, naming it PSINet Stadium. It then reverted to Ravens Stadium in 2002 when PSINet filed for bankruptcy.